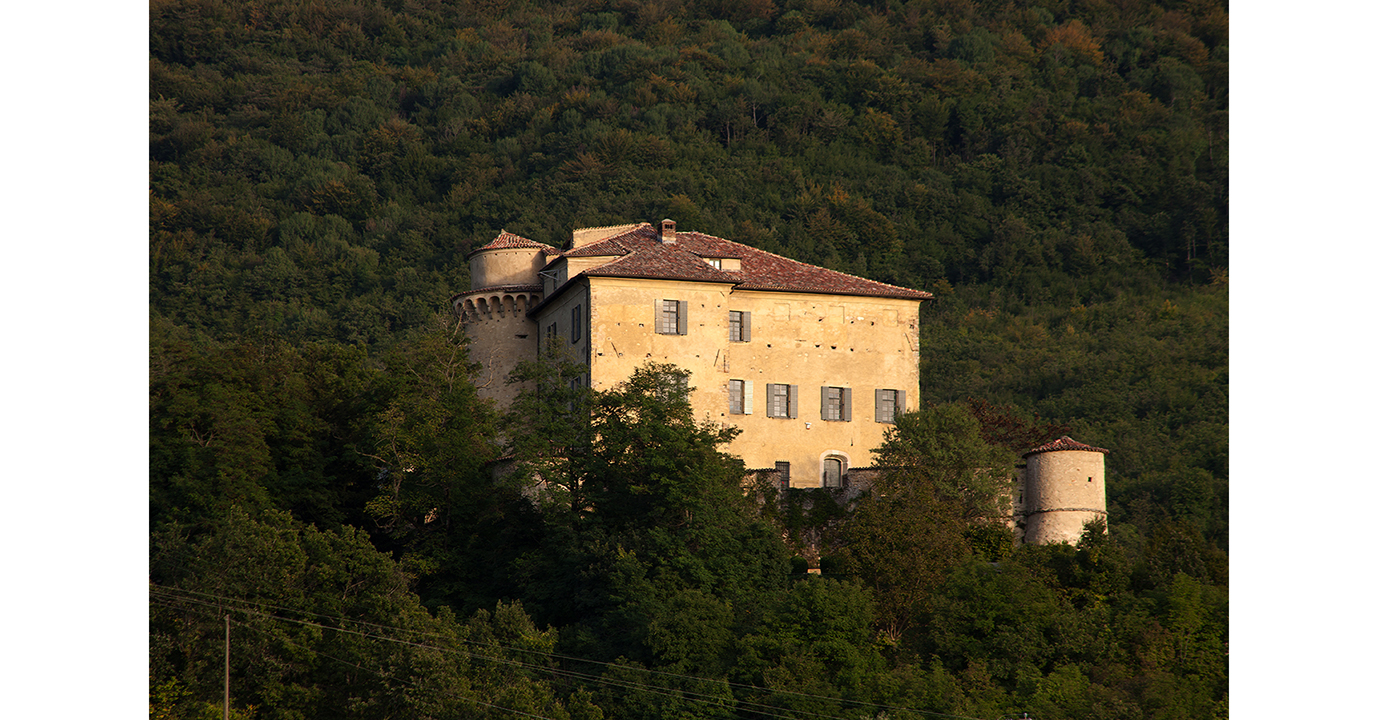 Following “le strette”, a gorge situated in the upper Val Borbera which is also a SCI place (Site of Community Importance),  and  under the slopes of the Giarolo mountain  can be seen a solid profile of a mighty and medieval construction. The solid fortress that can be seen is the Castle of Borgo Adorno.
The castle was built on a rocky cliff which overlooks the local torrent, the Besante. The castle also overlooks the entire Borbera valley and is visually connected to a collection of the other fortresses that emerge from the mountains which physically “shut” the Alta val Borbera. These include Roccaforte, of Montebore and Sorli. On clear days, then, you can easily see a landscape that starts in the Po valley ang goes to the Alps, from Monviso to the range of mountains of Bianco, Cervino, Rosa, reaching the Lombard Alps.

The first records on Borgo date back to the year 1176,when, according to a number of agreements made by Barabarossa and the Tortonesi family, many of their castles were returned to them, castles which even before in 1164 were given to the Pavesi family. Borgo was one of these castles. According to local historians, however, Borgo along with other fortresses  in the area was part of a defensive line of the late Roman Empire (IV century) to defend the city of Libarna. The presence within the current castle of a large volume of stone not justified by any structural need supports this hypothesis. In all cases, there are no traces or historical records of the presence of the castle up to the record mentioned above. There is reason to believe that during the various Lombard dominions, a Byzantine enclave continued to exist in Val Borbera, documented by discoveries which were found in some places in the valley. In Borgo Adorno, for example, a stone gravel with a Byzantine cross was found after some of the buildings have been demolished.

In the twelfth and thirteenth centuries, Borgo and the entire Borbera Valley was mainly governed by the Malaspina family, but also the Bishops  and the Municipality of Tortona had some power. In the XIV century the Spinola came, which progressively from the Scrivia Valley expanded into the Borbera Valley. During this period the presence of another castle was documented in Pallavicino, small village close to Borgo. In 1518 Tolomeo Spinola left heirs of his fiefdoms, including Borgo,  the brothers Antoniotto and Gerolamo Adorno. The presence of the Adorno family, an important Genoese doge family, continues until Napoleon's suppression of the feudal system (1797) . This continues to the present day through descendants. Already during the Spinola domination and after that of Adorno, the castle of Borgo was abandoned in favor of that of Pallavicino. When this collapsed as a result of a landslide, the Adorno focused their attention on Borgo until the mid 1600s when they decided to radically take action on the building. The castle was transformed into the existing noble house.

The castle of Borgo was the administrative central of numerous small fiefs that are spreaded like dots in Busalla and in Valle Scrivia with considerable strategic importance due both to the communication routes between the plain and the Genoese Republic, and to the prerogatives of the imperial fiefdom. which guaranteed complete independence and allowed the administration of justice too.
During the Resistance '43 -'45, it was the site of a field hospital and a partisan garrison. The castle of Borgo Adorno is characterized by a compact volume made of very irregular plant stone, slightlty quadrangular and developed in height. The irregularity of the plant is due to the pre-existing fortress of which, in the restructuring of the seventeenth century, the perimeter walls were preserved despite the  the main rooms  created a regular plan inside. This justifies the presence of external walls of considerable and irregular thickness in the rooms.

On the north-eastern corner there is a circular tower crowned by a jutting apparatus on clearly decorative corbels, which is dated back to the seventeenth-century restructuring. Extraordinary maintenance works carried out recently have highlighted how the tower structure was originally isolated from the rest of the builiding, thus allowing to hypothesize an ancient fortress system similar to that of coeval structures such as the castle of Carrega Ligure, or Campo Ligure, or made up of a fortified walled enclosure within which there were one or more towers of extreme defense and sighting. On the opposite south side there are, in fact, octagonal rooms that lead an hypothetical  presence of a further tower.

The square has a regular layout/ pattern with the presence on the opposite sides of two small symmetrical buildings and, on the containment wall upstream, a fountain completed by two symmetrical niches on the sides surrounded by pilasters and capitals. The layout of the square is clearly aged six / eighteenth century as documented by the date, 1704, reported on one of the pillar elements that delimits the access.

The chapel, dedicated to Santa Caterina Adorno Fieschi, the saint of the house, presents a harmonious façade on the square with a baroque structure and a rectangular plan moved at the corners and covered by a lunette vault, in which there is a small canal.

The small garden courtyard in front of the façade facing the valley has a very irregular plant and is surrounded by persistent terraces on pre-existing structures. Two small towers mark the limit.

The inside of the castle is made up of sober but at the same time “exciting” environments with terracotta flooring and stone covering vaults. On the first floor there is a double-height living room. This is a typical presence of the baroque residences in this case also justified by the functions of representation of an imperial fiefdom in which, as already mentioned, a court of justice was also expected to have been held.
The austere Castello di Borgo does not present any particular decorative architectural elements or pictorial decorations, although in documents of the end of 1781 one speaks of "painted great room" which has not yet been traced. However, there are two rooms with lunettes painted by Clemen Parrocchetti in the late 50s. The charm of the castle is therefore due to its dominant position an uncontaminated valley without any disturbing structural or natural element and the integrity of the structure, which responds to the seventeenth century descriptions, in the presence of a largely original furniture as well as the collection of contemporary art by Clemen Parrocchetti, descendant of the Adorno family, who lived and worked here for a long time.